An Unforgettable Day on the Hill

Written by: Yael A.

Many people go to D.C. Fewer go to D.C. to advocate, and a tiny fraction get to meet with several congressmen to discuss a variety of hot-button issues. My group? We were a tiny fraction of a fraction who got to watch a related bill be debated and attend a private press conference held by the Speaker of the House.

I had the honor of being in the Human Trafficking Tikun Group. Contrary to the - er - questionable connotation of the group name, our group wrote speeches and questions to persuade two members of the House that human trafficking was an urgent problem that HAS to be solved. The funny thing is, pretty much non of the meetings worked out. Instead, we got the privilege of watching the Frederick Douglass Trafficking Victims Prevention and Protection Reauthorization Act of 2017 be presented to the House. The bill thankfully passed through the House and contained motions to increase availability of supplies for sex trafficking victims and reinstitute awareness through education.

Following our trip to the House, we walked into a small room with few people but several cameras. The Speaker of the House, Paul Ryan, and several other instrumental representatives took turns expressing their determination to bring an end to this atrocious crime against humanity. We then met with the author/co-sponsor of the Bill: Representative Chris Smith (R) of New Jersey (don't ask me which part). He gave us come more insight on the non-partisan bill and even answered our questions. Not too bad for a bunch of 15-16 year olds, huh? Afterward, we had a proper Q&A with one of his staffers. It was extremely informative, and overall, an incredible experience. Hopefully on Machon, we'll be able to do more important work! 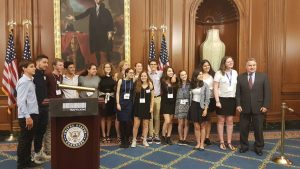