Nothing makes you feel old like counting the years you have known your friends from camp.

I’ve known Seth Fishman for fifteen years, just under half my life.  We met at my regional spring convention at Tel Yehudah in 1998.  Seth was from Texas, but he was doing that thing where you’re on Mazkirut (Young Judaea’s teen-elected governing board) so you get to fly around the country and hang out with your camp friends in the middle of the year, which was like half the reason to do Mazkirut in the first place.  He had that weird-but-in-a-cool-way vibe and the best Jewfro in all of Barryville. Obviously I wanted to be his friend.

When we said goodbye at the end of the weekend we made a deal: No awkward hello when we saw each other again at camp in a few months. We would not do the whole “Do you remember me? We like just met, but maybe you don’t remember me…?”  (Apparently we both had the same paranoia that we were not memorable people.) Instead, as soon as we spotted each other, we would run and hug and do the most elaborate hello possible.  A few months later, when Seth arrived for second session, we did not let each other down. It was the biggest, most elaborate, most wonderful hello in the history of camp reunion hellos.

Last night when I saw Seth, I did not get the running, jumping hello. But maybe that was because he was sitting behind a table, signing books. His books. As in, the book he wrote. Pretty impressive for the awkward Texas kid with the crazy hair.

Published this week, Seth’s debut novel, The Well’s End, tells the story of seventeen-year-old Mia Kish and her friends as they attempt to escape a strange illness that causes people to age years in just a few hours. Quarantined at their ritzy Colorado boarding school, Mia has to lead the group to her father, who she is starting to realize doesn’t exactly work at an electronics company as she’s been told all these years.  It’s a suspenseful page-turner, the kind that kept me standing on the subway platform reading, long after the train had let me off, because I couldn’t bear to put the book away.

Though the plotline has nothing to do with camp (I repeat: there is not now, nor has there ever been, a contagious disease spreading through camp), Seth can trace the characters back to his summers at Tel Yehudah.

“I modeled all of these kids after my TY campers,” Seth confesses. “As a counselor, I was observing them on every level. I lived with them for months on end.” But while former campers are encouraged to buy the book and see if they can spot themselves in the pages, Seth emphasizes that no character is based on any single, specific former camper. “It was an amalgamation of them all.”

It’s a funny thing to be reading a book written in the voice of a seventeen year-old girl and have to remind yourself that it was your 33-year-old, male friend who actually wrote it.  But according to Seth, finding his way into Mia’s mind was no simple task.

“It wasn’t easy,” Seth says. “For instance, for Mia’s love interest, my editor kept on telling me that Mia was pining for this guy, and he was showing no interest whatsoever. She said it felt very lopsided.”

“I was like wait a minute,” he continues. “That’s weird. I didn’t know that she was pining. As I was writing, I thought she was just being coy. And I thought he was being, like, pretty obvious. All of a sudden I realized why I didn’t have a girlfriend in high school.”

(Don’t feel so sad for Seth. He did just fine with the ladies: He recalls his favorite TY make-out spots as the “tennis courts between Machaneh Aleph and Bet and the MH Aleph tents.” And now he’s married to the beautiful Marget Thomas Fishman, a Clinical Psychology Doctoral Candidate at Rutgers.) 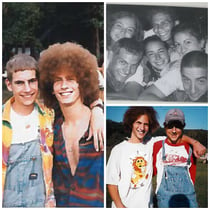 Camp helped Seth become the author he is today in other ways, too. Besides giving him plenty of material to work with, Seth also exercised some of those young creative writer muscles on the Beit Am stage.  “As a camper, I was very poetry oriented. Perhaps this was not the smartest of moves but I would consistently read my poetry at the camp talent show.”

(I am very sad to say that this occurred before I got to TY. I will personally offer a $100 donation to TY in honor of anyone who can find a video of Seth reading poetry. I’ll do $50 for the handwritten poems.)

“My friends David Bourla, Ben Rubin, and Jay Katsir did a thing every year where Jay and Dave would play the drums and Ben would dance.”

(This act I have seen before and can personally attest to its real entertainment value and artistic merit.)

“I went immediately after them one year, and everyone clapped. I felt a rush.  It felt really good. But when I think back on it now…”

Seth Fishman is a native of Midland, Texas (think Friday Night Lights), with a long Young Judaea history - Seth started at CYJ Texas in 1989, was a TY camper ('96, '98), Machon in Israel ('97), YJ National Mazkirut member ('98-'99), Year Course ('99-'00), TY staff member ('99-'01), and CYJ Texas staff member ('98, '99, '02). Seth is a graduate of Princeton University and the University of East Anglia in Norwich, England. He spends his days as a literary agent at The Gernert Company and his nights (and mornings) writing. He lives in Jersey City, New Jersey, with his wife. The Well's End is his first novel (that's not in a drawer), and is now available in stores. Follow him on Twitter, @sethasfishman. Or check out his website.

Deena Shanker is from Goshen, New York, a proud native of Young Judaea’s Empire Region, TY camper ('97-'98, '00), Machon in Israel ('99), and TY staff member ('01-'03). She is a graduate of Barnard College and the University of Pennsylvania Law School. She spends her days as the Healthy Food Editor at BuzzFeed and her nights in sweatpants. She lives in Manhattan with her dog. Follow her on Twitter, @deenashanker. (Seriously, though, please follow her on Twitter, she is very insecure about not having enough Twitter followers. Thx.)