LionFest: A Recap of Young Judaea's National Gathering of Teens

LionFest 2014 was truly a gathering of the YJ tribes; bringing together teens from all around the country to participate in peulot (informal activities) featuring controversial issues in Israel and our first-ever YJ Winter Games (a mini-replica of our highly popular summer Maccabia, or Color War, competitions). 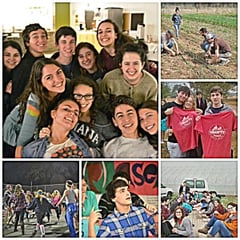 We started the weekend off introducing our theme of controversial Israel issues with a bracket asking participants to decide a winner among many controversial mundane questions. Pop vs. soda, Coke vs. Pepsi, and chocolate vs. vanilla were just a few questions among many others vying for that number one spot.

After teens slowly but surely trickled in Friday night, mostly due to their cancelled then rescheduled and then delayed late flights, we began our Saturday with Young Judaea's tradition of offering a few options of different styles of t'fillot (prayer services). Throughout the day, teens participated in a number of optional activities, educational peulot, and the YJ Winter Games, where brave representatives of each team took on our Manager of Youth Leadership and Education, Andrew Fretwell, in a rap battle.

Within our educational peulot, teens confronted the many controversial issues surrounding Israel. Participants had to decide whether Zionism was racism, learn the differences between a terrorist and a freedom fighter, discuss how Hatikvah and the flag might promote a certain viewpoint, and argue Israel's case for a Jewish democracy. We ended our day of rest with shira shketa, rikud, and a dance party remembered for years to come.

Our next day at CYJ Texas gave participants a chance to meet National Mazkirut candidates and hear their platforms. Shortly after, teens chose between a wide array of workshop groups ranging from a focus on Israeli films, activism, discussing how art helps or hinders a movement, and Year Course orientation, the latter being limited to only those attending the program this coming year

Then, it was finally time to elect Young Judaea's new National Mazkirut! Teens were asked to get in on the fun by dressing up as their best impressions of a grandma or grandpa. Needless to say, there was tons of baby powder used to achieve the perfect look for a head full of gray hair. We wrapped up the day by sipping some hot chocolate, eating funnel cake, and of course, discussing our favorite parts of the weekend.

Our last day in Austin, Texas was one of sorrow and excitement. Half of convention departed back home and half stayed in Austin for a day of community service. Those who stayed went to Green Gate farm where they helped with weeding, washing vegetables, and moving bricks to help construct a new kitchen.

Even with the winter weather in the Northeast, the turnout to convention was remarkable. Everybody that came showed incredible enthusiasm and dedication towards convention and Young Judaea.

Check out pics from LionFest 2014 here!