Israeli Elections: The View from Ketura

As the actual day of elections approached, I realized that the most important thing was to be sure everyone voted. The stories in the news, and the predictions were flying – every press source, every site had different particulars, but the fact is the predictions all showed Israel with a very right of center government – more than ever before... more extreme statements and views and more extreme policies.

When I first learned what ‘right’ and ‘left’ meant in the context of Israeli politics, at a Young Judaea convention – being taught by people a year or two older than me - I was quite sure that I fell solidly in the left. Since then the nuance of layered issues has become much more complex. For one thing I live here now. Things I learned in theory in the movement have become my reality on the ground. I now have Palestinian friends and research colleagues. I live on a collective kibbutz (one of the more traditional style). I have had to negotiate complicated situations within the health insurance system in Israel. I have seen some environmental messes that call out to be healed. I have had to read a pay slip with all it’s complicated components. I have studied in Israeli universities (I am on my third one, in fact) and learned about the systems there. I have had to have my actions, clothing, speech and location adjusted or limited in religious services (in certain places) because I am a woman and because I believe in egalitarian practices. Moving through life in this country, things we learned in relatively simplistic terms come to life and take on many more than 3 dimensions.

This 2013 election loomed with many issues that seem to have burning importance and cannot wait: economic policies, the Palestinian-Israeli issue, environmental policies, the cost of housing, public health, the Africans migrating to Israel, the relationship of non-profits and the government, who serves in the military… so many issues – it is hard to even rank which is most important and which less (none are less important). None seemed to be able to wait for the other to be taken care of.

I posted to facebook asking everyone to vote. I avoided getting into political arguments, and focused my energy on encouraging everyone to vote. I volunteered to help with the voting station here on my kibbutz. I had done so in the past – but not the last election where I was so disillusioned I could barely get myself to vote. This time – there were very interesting issues and a wide variety of parties to think about. Our kids – the teenagers on Ketura – organized a political café and invited the community to come eat yummy cookies and cakes and talk politics. I learned a lot from our high school kids genuine interest in our answers to a series of questions they had arranged as the café’s menu – just like a good YJ peulah. 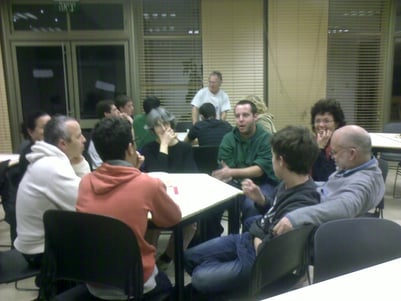 I spent the morning “like”ing everyone’s post if it said that they voted, without making any statement about a particular party. I also studied the manual for volunteers at the voting stations. I kid you not – I had to study all 12 pages of it. This time around, I spent a good 6 hours serving at the station and was able to count our results when the polls closed (another hour to count and record everything and pack it up for delivery to the central office).

First of all Ketura had a list of 430 potential voters. A rough estimate shows that about 90 are people who left Israel and no longer live here (some for more than 20 years) and should be off the list. Another 60-80 people are members of one of the gariney nachal from over the years or other temporary residents who had not updated their address but were unlikely to come this far from the center of the country to vote. (One did – he flew down to Eilat in the morning, voted first, and flew back to work – he is a journalist and was covering one of the party’s headquarters!). Another group of names on the list were people in the army – who were eligible to vote on base and not have to come home, and some were the kibbutz kids who are now in college – some were able to vote at University of Haifa rather than coming home to vote…  All in all we had 200 people vote, and I would say the only ones who did not were people who were ill, abroad at this time, or otherwise unable. I think there were no more than 3-4 people who were home and able and did not. I find that very impressive!

I was able to learn alot more from the voting station committee not only about the Ketura station - but about other Arava stations and even better - I was the person allowed to actually count voters, make sure envelopes matched in number and then ACTUALLY count the votes. The results will not surprise anyone in the bigger numbers, but of the 12 parties that got votes here, the smaller numbers might surprise some. You can see Ketura’s specific results here: http://www.votes-19.gov.il/cityresults?cityID=1052 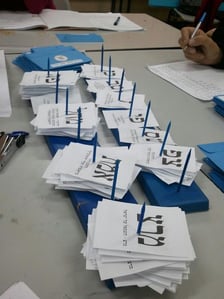 You can look up any yishuv or voting station by choosing them from the drop down list at the top of the page. I have to say that I think it was a fabulous experience of democracy in action – the people who worked the station (2 were government employees and 2 others volunteers like me) were wonderful and I am thankful I was able to do it. I also thank my cousin Dafna for this photo - I did not think to take one... yes this is the simple method by which we count votes. I still have two holes in my hand from the sharp spikes - but learned quickly to avoid them.

As for the results – well it won’t surprise anyone who knows me if I say I wish the national results were closer to those of the Ketura results – or even the average of all the results from the Arava kibbutzim. Our bubble is special and reflects my life choices better than the rest of the country. A lot of people are saying "honesty" won the election - I am wondering - though I wish I could agree - if we elected honesty, or simply new - untried and not yet corrupted people... half of the elected MK’s are new to that kind of position. I hope they can all do a hadracha course or something like it to be prepared for their new job. Let's hope and pray that they continue to be honest and work hard for the good of the country. Let’s hope that whatever coalition forms, it will last long enough to make some meaningful changes for the good of all citizens.

Thanks for letting me share my experience with you. And if you are in the neighborhood – let me know.

Sharón Benheim grew up in Silver Spring, Md, and was active in Glil Yam Young Judaea since meeting Neil Churgin at age 14 when he convinced her that she needed to serve as club programmer and therefore must attend Camp Tel Yehudah. She served the Rockville club for two years before being elected to the position of National Programmer in 1982-83 where she had the honor of serving with the finest National Mazkirut ever and enjoyed writing for Kol Hatnua. After participating in an amazing Year Course (’83-84) and finishing a B.Sc. at U of Maryland as fast as possible, Sharón moved to Israel in 1987 to study at Hebrew University. She then lived on a kibbutz in the Galil for a while before moving south. She has been a member of Kibbutz Ketura since 1996 – often adopting Young Judaeans who volunteer on the Kibbutz. Sharón is married to Neil Churgin and they have 4 boys born between 1995 and 2000.

Sharón holds a Masters in Public Policy: Mediation and Conflict Resolution from the Tel Aviv University and is continuing her studies towards a doctorate in the field at Ben Gurion University. Sharón was a founding staff member of the Arava Institute for Environmental Studies from 1996, most recently serving as Director of the Arava Institute’s Alumni Projects and coordinator of Jordanian recruitment, before leaving in 2012. Sharón is a member of Mediators Beyond Borders, a facilitator for Young Negotiators Network, and for MEJDI tours, and has taught and led many workshops in a variety of contexts. On a freelance basis, Sharón works with a variety of groups, communities and organizations on process design and facilitation, as well as workshops on communication, mediation and decision making.