NEW YORK (November 21, 2011) - In its latest move toward independence, Young Judaea announced today that Simon Klarfeld, a highly regarded community builder and innovative educator with critical skills in organizational change, will become its inaugural executive director. Klarfeld is taking the reins at a momentous time in the youth movement's 102-year history, as it branches off from its longtime parent organization, Hadassah, the Women's Zionist Organization of America.

In a joint announcement, the two organizations said Klarfeld was chosen for his more than 20 years of experience in working with pluralistic Jewish communities around the world and his vision for Young Judaea's five Jewish camps nationwide, year-round activities, and preeminent Israel programs, including the most successful freshman gap-year program, Year Course in Israel. Young Judaea reaches more than 5,000 Jewish youth each year from grade school through post-college. 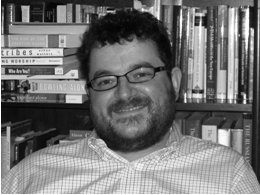 "Having lived a life devoted to pluralistic Jewish, Zionist ideals, leading Young Judaea is a real honor for me," Klarfeld said. "This is an absolutely crucial time for us to refocus and redefine our commitment to helping young Jews explore their identities and connections to Israel in profound, experiential ways. I take great pride in the work I have done in building and strengthening vital, passionate Jewish communities, and Young Judaea is the premier place to continue that work."

Klarfeld, 44, is a native of London, England, where as a teen, he ran his first overnight summer camp for Jewish teens from across Europe, and chaired the Zionist Youth Council of Great Britain. As a young adult, he lived in Russia, directing activities on behalf of the Soviet Jewry movement there. His work included the training of Jewish youth leaders throughout the then-Soviet Union.

"Simon Klarfeld brings a breadth of inclusive leadership that will inspire Jewish youth to engage at the highest levels possible, something for which Young Judaea has long been known," said David Bechhofer, president of Young Judaea's founding board. "He is precisely the right person to pilot Young Judaea at a time when developing leadership - true leadership as Young Judaea has always defined it - is critical to the Jewish community worldwide."

Marcie Natan, national president of Hadassah, said Klarfeld's appointment is one of the final steps in Young Judaea's path to independence. In June, Hadassah, which had supported Young Judaea for more than 70 years and had been its sole sponsor since 1967, approved a three-year transition toward autonomy that includes significant financial and organizational support to help the youth movement achieve continued success.

"Simon's passionate devotion to young people and to Israel truly shines through in everything he does," said Natan, who was involved in the search process to fill the position. "I am confident that he will empower the youth, the staff, and the lay leaders to fashion important conversations and programs about Israel, and I could not be more excited about working together."

Alan Hoffmann, director-general of the Jewish Agency for Israel, also praised the move: "I know Simon well, and I am more confident than ever about Young Judaea's prospects as an independent organization under Simon's leadership."

Klarfeld, who most recently transformed the Hillel at Columbia University and Barnard College during his seven-year tenure as its executive director, has taught courses on Jewish Perspectives on Leadership, Contemporary Israel, Zionist History and Ideas, and Jewish Philosophy of Freedom, at conferences, universities, and institutes throughout the world. He also has trained informal Jewish educators through the Institute for Informal Jewish Education, the iCenter, Foundation for Jewish Camp, North American Alliance for Jewish Youth, Brandeis University's Hornstein Program in Jewish Communal Service, and Machon L'Madrichei Chutz La'Aretz.

Prior to Columbia/Barnard Hillel, Klarfeld professionally served as director of the Soviet Jewry movement in both England and Northern California, vice president of the Andrea and Charles Bronfman Philanthropies, interim vice president of Birthright Israel North America, and founding director of Genesis at Brandeis - a summer program for high school students.

He lives in Teaneck, N.J., with his wife, Dara Klarfeld (nee Zabb), an alumna of Young Judaea's Camp Sprout Lake and national high school leadership camp, Tel Yehudah, and their three young children. Klarfeld, who is fluent in Russian and also speaks Hebrew and French, holds a bachelor's degree in politics, philosophy and economics from the University of Keele in England, as well as a master's in Jewish communal service from Brandeis.

Klarfeld will start his new position on December 1 and will work together with Steve Goldberg, Young Judaea's interim executive director, who was appointed this summer to oversee the transition. Goldberg recently accepted the executive directorship of Congregation B'nai Jeshurun in New York City.

If you have additional questions, please send them to answers@youngjudaea.org
or call us at 212-303-7448
For more information, please visit www.youngjudaea.org.